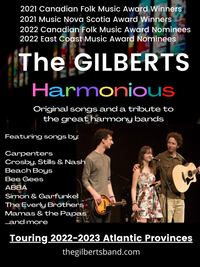 Harmonious is a touring show featuring original songs by The Gilberts and songs by artists that have influenced their music and particularly their signature three-part harmonies including Crosby, Stills & Nash; The Beach Boys; Bee Gees; Simon & Garfunkel; The Mamas & the Papas; Carpenters; Fleetwood Mac - and more!

Gathered Together. Gaelic culture runs deep in Christmas Island (Eilean Na Nollaig), where the traditions have been kept up, treasured, and passed on. Through the efforts of Commun Féis an Eilein, the community has actively gathered together to preserve and promote the Gaelic language and culture in the area, presenting concerts, workshops and other learning opportunities. Gaelic will be front and centre here with beloved singer and tradition-bearer Mary Jane Lamond, and transplanted Mabou native Angus MacKenzie and his family. Còmhla cruinn means “gathered together” and Christmas Island has been a gathering place for Cape Breton Gaels for generations. Today they’ll welcome the brothers and sister trio The Gilberts, whose family harmonies and refreshing sound made them such a hit when they debuted at Celtic Colours last year. Enjoy the scenic drive alongside the Bras d’Or Lake as you make your way to the Christmas Island Fire Hall for this intimate afternoon concert featuring young Gaels, Gaelic culture-bearers, and family singers.

Island Echoes with Wendy Bergfeldt. During last year’s Festival we celebrated 50 years of CBC Cape Breton’s highly-impactful radio program “Island Echoes” which has become a weekly tradition in many households across Cape Breton Island and beyond. For an hour every Saturday night, you can tune in and be sure that you’re going to hear some distinctly Cape Breton music—traditional tunes and new compositions, songwriters and Gaelic singers, storytellers and culture bearers, both traditional and contemporary. Hosted by Wendy Bergfeldt, the program keeps you up to date with Cape Breton’s culture, showcasing up-and-comers as well as established artists. Tonight’s concert, also hosted by Wendy, will feature tunes on fiddle and piano, harp and more as well as songs in Gaelic and English, and Mi’kmaw drumming and singing, as if the radio program itself has come to life. It’s not quite an in-depth, “behind the music” exploration of the music, but more like an old-time radio show, providing some context for the music through Wendy’s conversations with the artists between performances.

An Afternoon of Songs and Tunes with The Gilberts; Sian; Mckayla MacNeil and Sheumas MacNeil and Malcolm MacNeil 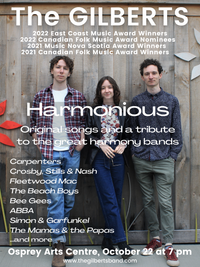 Harmonious is a family friendly show that appeals across the generations and features original songs by The Gilberts along with songs by artists that have influenced their signature harmonies including Simon & Garfunkel; Crosby, Stills & Nash; ABBA; the Mamas & the Papas; Fleetwood Mac; the Bee Gees; Carpenters; Beach Boys and more!

The Gilberts are delighted to be part of this major festive fundraiser. Details to be announced!