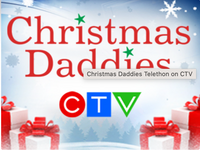 The 59th Annual Christmas Daddies Telethon will be broadcast on CTV2

The uniqueness of the Christmas Daddies Telethon is that everyone who participates is a volunteer – from the technical side, to the people in front of the camera and those on the phones. Almost everything from lighting to food is donated by the corporate community. CTV donates airtime and technical equipment to make the production and live broadcast possible. We are one of the longest running telethons in North America.

Since the program’s first broadcast in 1964, Christmas Daddies has raised a grand total over $34.5 million dollars for less fortunate children.